Rheumatoid arthritis is a common condition which affects people of all ages. If you have been feeling a certain sensation in your lungs it could be an early sign of the condition.

As most know, arthritis is a condition which affects the joints, however sometimes the condition causes lung disease.

Occasionally, lung problems surface before the joint inflammation and pain of arthritis ensue.

Besides the joints, the inflammatory process that underlies rheumatoid arthritis also affects other parts of the body, including the lungs, skin, eyes, digestive system, heart and blood vessels said Arthritis Foundation.

DON'T MISS
Arthritis treatment: Exercises to help with symptoms [ANALYSIS]
Arthritis - easy exercise to protect against the joint pain condition [RESEARCH]
Rheumatoid arthritis symptoms: The type of pain to watch out for [STUDY]

The Mayo Clinic said: "The lung problems most often linked to rheumatoid arthritis include:

"Scarring within the lungs which is sometimes related to long-term inflammation (interstitial lung disease) may cause shortness of breath, a chronic dry cough, fatigue, weakness and loss of appetite.

"Lung nodules which are small lumps which form in the lungs (rheumatoid nodules), as well as in other parts of the body.

"Lung nodules usually cause no signs or symptoms, and they don't pose a risk of lung cancer.

"In some cases, however, a nodule can rupture and cause a collapsed lung." 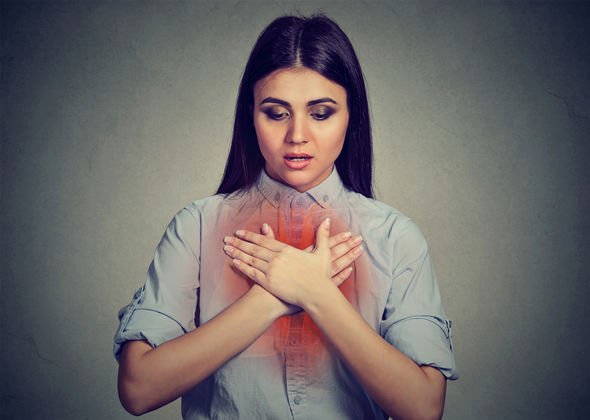 Lung scarring may lead to breathing difficulties and related symptoms which include:

According to the National Rheumatoid Arthritis Society, lung disease ranks second only to heart disease of all rheumatoid arthritis-related causes of death.

Lung diseases alone can reduce a person's life expectancy due to the prevention of oxygen to the rest of the organs and body tissue.

According to the journal Proceedings of the American Thoracic Society, a person's life expectancy decreases by 10 to 11 years compared to those who don't have rheumatoid arthritis if the disease isn't effectively treated.

If you have noticed problems with your lungs or breathing, it's important to speak with your GP to begin proper treatment.