It's normal to experience some bloating, especially after eating gassy foods or overindulging. However, experiencing persistent bloating which doesn't go away is actually one of the most common symptoms of ovarian cancer. How can you know for sure your bloating may be something far more serious?

Bloating which is related to ovarian cancer may cause visible swelling in the abdomen.

The belly might feel full, puffy, or hard and a person may also have other symptoms, like weight loss.

If it is ovarian cancer, the bloating experienced is likely caused by ascites.

Ascites is when fluid builds up in your abdomen, said Healthline.

The site added: "Ascites often form when cancer cells spread to the peritoneum.

"The peritoneum is the lining of your abdomen."

What is ovarian cancer?

Ovarian cancer is a type of cancer that begins in the ovaries, said the Mayo Clinic.

The health site continued: "The female reproductive system contains two ovaries, one on each side of the uterus.

"Ovarian cancer often goes undetected until it has spread within the pelvis and abdomen.

"At this late stage, ovarian cancer is more difficult to treat.

"Early-stage ovarian cancer, in which the disease is confined to the ovary, is more likely to be treated successfully."

Signs and symptoms of ovarian cancer may include: 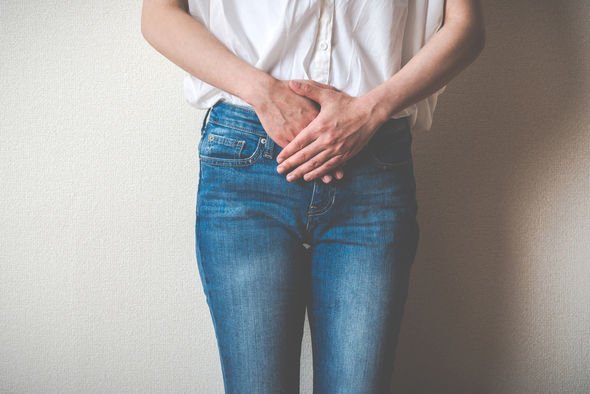 Abnormal cells can also amass into benign tumours, which don't spread to other body parts.

These types of tumours may require treatment but are rarely a threat to your life.

In a recent survey, UK charity Target Ovarian Cancer found that just 34 percent of women would talk to a doctor if they were regularly bloated.

The survey also revealed that 50 percent said they'd make a change to their diet instead.

A previous survey by the same group found that just 20 percent of women knew that bloating could be a symptom of ovarian cancer.