Bloating is the uncomfortable feeling you get after overindulging or eating a particular food item which does not agree with you. Often it's nothing to be concerned over and symptoms will subside in due course. However, sometimes a person's bloating could signal an infection and medication may be needed to help treat the cause.

One underlying condition that can trigger bloating is Giardiasis, a tummy bug that causes symptoms like diarrhoea, farting and bloating, according to the NHS.

It usually goes away in about a week if it's treated but can sometimes last much longer.

There are lots of ways you can catch giardiasis, such as:

Giardiasis is an infection in your small intestine.

It's caused by a microscopic parasite called Giardia lamblia. Giardiasis spreads through contact with infected people.

G. lamblia are found in animal and human faeces.

These parasites also thrive in contaminated food, water, and soil, and can survive outside a host for long periods of time.

Accidentally consuming these parasites can lead to an infection.

Apart from bloating, other symptoms of giardiasis include: 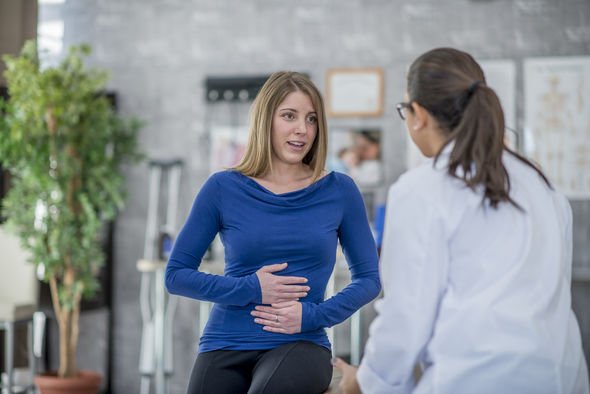 The site continued: "Giardia infection is caused by a microscopic parasite that is found worldwide.

"Giardia infections usually clear up within a few weeks.

"But you may have intestinal problems long after the parasites are gone.

"Several drugs are generally effective against giardia parasites, but not everyone responds to them."

How to diagnose giardiasis

A person may have to submit one or more stool samples for testing.

A technician will then check the stool sample for giardia parasites.

A GP may also perform an enteroscopy which is a procedure involves running a flexible tube down your throat and into your small intestine.

This will allow your doctor to examine the digestive tract and take a tissue sample.