Progressive hair loss has a cosmetic and social impact. Hair undergoes three stages of hair cycle: the anagen, catagen, and telogen phases. Through cyclical loss and new-hair growth, the number of hairs remains relatively constant. A variety of factors, such as hormones, nutritional status, and exposure to radiations, environmental toxicants, and medications, may affect hair growth. According to numerous studies, using papaya on the scalp has shown impressive results in helping to increase hair growth.

Papaya's are a pear-shaped tree-fruit that is commonly referred to as the "the fruit of the Angels," due to its multiple health benefits.

The papaya contains a large amount of Vitamin C, which is crucial for its restorative and healing properties.

It also contains about 224 percent of one's daily needs of vitamins and minerals.

The folic acid that papaya contains, as well as Vitamin C, both improve circulation throughout the body, including the scalp.

The scalp is fed the nutrients and minerals that are needed to produce healthy hair growth and stimulate the sebaceous glands.

The sebum that is produced nourishes, conditions and protects the scalp, providing a healthy environment for new growth to flourish.

In a study published in the National Library of Medicine, hydroxy salicylic acid from papaya and its potential ability to promote hair growth was analysed.

The study said: "An aliphatic ester of hydroxy salicylic acid, reported for the first time from a natural source in addition to five known compounds, were isolated from the fermented papaya preparation, a commercialized functional food.

The study concluded that compounds found in papaya showed a moderate antioxidant activity and a potent hair growth stimulating activity.

In another study published in the National Library of Health, vitamin A found in papaya and its effectiveness in hair growth was investigated.

The study noted: "Vitamin A and its derivatives (retinoids) are critically important in the development and maintenance of multiple epithelial tissues, including skin, hair, and sebaceous glands, as shown by the detrimental effects of either vitamin A deficiency or toxicity. 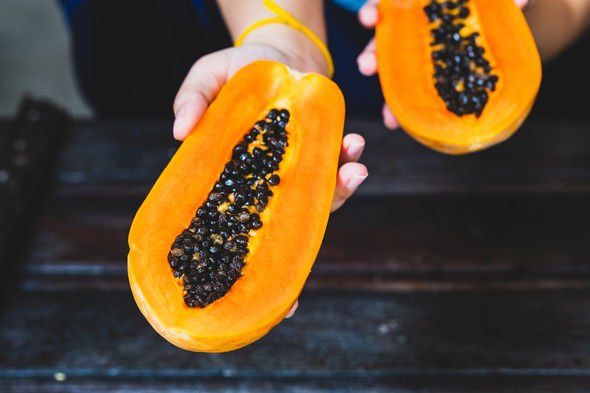 Papaya has also been found to help combat hair issues such as dandruff.

One of the main causes of dandruff is a yeast-like fungus known as Malassezia.

Numerous studies show that the antifungal properties of papaya seeds can help assist in both controlling and preventing dandruff.

According to studies, the nutrients in papaya help prevent balding. Eating the fruit at least thrice a week can help reduce hair thinning.

Papaya is rich in minerals, vitamins and enzymes and acts as a natural conditioner, making the hair softer and smoother.

Blend papaya, banana, yoghurt and coconut oil together into a thick paste and apply it to damp hair.

Wrap a towel or use a shower cap for half an hour to generate heat in your scalp.