High cholesterol levels are troublesome as it means there is too much ‘bad' cholesterol floating in the blood, which can result in serious complications. The condition does not have any obvious symptoms in the early stages meaning many are unaware until it is too late. Fortunately, eliminating certain types of foods such as processed meals and animal fat, levels will reduce. There are other foods known to lower levels and are highly recommended.

Dietician Helen Bond said: "Our increasingly unhealthy lifestyles - poor eating habits that include too much saturated fat, a lack of exercise, smoking, high alcohol intakes and expanding waistlines due to a slowing metabolism - mean that as we move through the decades towards retirement age, the more likely we are to have unhealthy cholesterol levels.

"In fact, according to the latest figures from the Health Survey for England, only a third (35 percent) of 25 to 34 year olds have a total cholesterol above the generally accepted healthy target of 5mmol/l, compared with nearly half (48 percent) of 35-44 year olds, 61 percent of 45-54 year olds and 65 percent of 55-64 year olds.

"Don't forget, all adults aged 40-74 years living in England are eligible for a free NHS Health Check and it should be repeated every five years."

In one notable study, published in The American Journal of Clinical Nutrition, participants who ate 200g of raw carrot for breakfast each day for three weeks observed an 11 percent reduction in their serum cholesterol.

The cholesterol-lowering effects are attributed to pectin - the main form of soluble fibre in carrots.

According to research, certain soluble fibres can impair the absorption of cholesterol from your digestive tract, thereby lowering blood cholesterol. 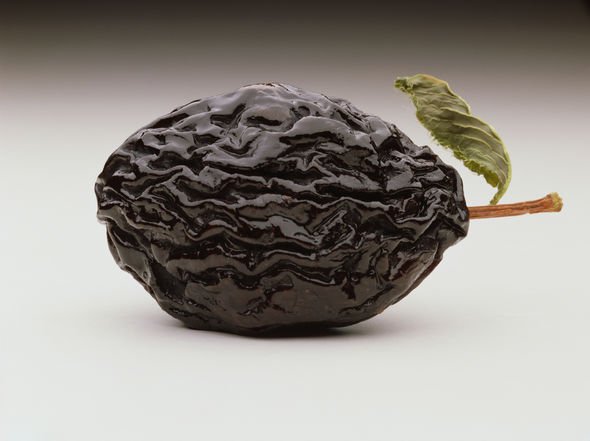 To help lower your cholesterol, it has been suggested to consume more prunes.

A study found that those who consumed the prunes and prune juice had significantly lower blood pressure levels, total cholesterol and "bad" LDL cholesterol than the group that drank water.

LDL cholesterol is generally regarded as the most harmful form of cholesterol because it sticks to the inside your artery walls, restricting the blood flow.

The food also contains useful minerals, such as iron, copper and B vitamin, folate.

The NHS recommends four eating habits to help lower cholesterol levels, with the first being to eat oily fish, such as mackerel and salmon.