Parkinson's disease is a condition that causes the brain to become progressively more damaged over time, said the NHS. You could be at risk of the neurodegenerative condition if the average number of times you blink seems to be reducing, it's been revealed.

One of the key warning signs of the neurodegenerative condition is a change to the number of times you blink, it's been revealed.

Some Parkinson's patients may find that they blink less often than they're used to.

Most people usually blink around 17 times every minute, accord to the American Parkinson Disease Association (APDA).

But, if you have Parkinson's, you may find that it "substantially" reduces over time.

There's no set limit to how often Parkinson's patients blink in a minute, but if you're blinking less than normal, you should consider speaking to a doctor.

"People with Parkinson's disease may have a variety of complaints related to their vision such as trouble reading, double vision and dry eyes," said APDA.

"The blink reflex, which occurs normally at about 16 to 18 times per minute, may decrease in Parkinson's disease, sometimes substantially.

"Less commonly, the flipside may occur, with excessive blinking known as blepharospasm.

"Occasionally, there is apraxia of eyelid opening, which is an inability to open the eyes voluntarily." 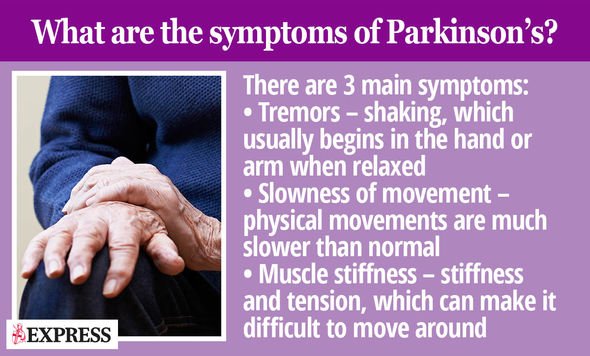 You could also be at risk of the neurodegenerative condition if you notice a subtle change to the volume of your voice.

Some Parkinson's patients find that their voice becomes a lot softer over time.

It may even seem like their voice trails off toward the end of sentences.

Changes to patients' voices are likely caused by bradykinesia - or slow movement.