Parkinson's disease is a nervous system disorder that affects around one percent of people aged over 65 years and older. Symptoms usually develop slowly over several years. Noticing a certain sign in your feet could be a warning.

In a study with the US National Library of Medicine National Institutes of Health, dystonic pseudo foot drop was further investigated.

The study noted: "The most common presentation of foot dystonia in patients with Parkinson's disease (PD) or dystonia is inversion of the foot accompanied by flexion of the toes, with or without extension of the hallux.

"Less commonly, foot dystonia may mimic foot drop, as occurs with weakness of the dorsiflexors muscles, resulting in a pseudo foot drop.

"Patients with lower-limb dystonia often complain of dragging the foot.

"This is particularly common in patients with Parkinson's disease and in children with dystonia."

The Dystonia Society says foot dystonia is uncontrollable and often painful muscle contractions in the foot which causes a twisting or turning in of the foot.

It adds: "Foot dystonia is believed to be caused by incorrect messages from the brain to the muscles in the foot or lower leg.

"Symptoms generally appear between the ages of 30 and 50 although sometimes symptoms can appear earlier or later.

"Generally, if focal dystonia starts in adulthood, they affect only one part of the body.

"If they spread at all, which is unlikely, it is usually only to one other area with treatment usually involving regular injections."

Parkinson's UK said: "Many people with Parkinson's gradually develop a stooped posture, which affects the feet in two ways.

"Firstly, your body compensates for your weight being held more to the front of your feet and causes your toes to ‘claw' as they grip the ground or your footwear.

"Overtime, your toes get stuck in this position and cannot flatten properly to help you keep your balance. 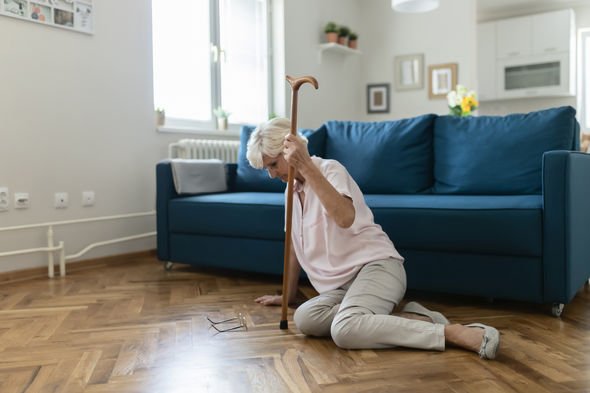 "The second change is in the length of the muscles around your ankle to cope with the shift in your weight.

"The changes in position mean that some muscles get stretched, while others shorten.

"Both of these changes alter how efficiently you walk and mean you don't put your heel down first as much as you used to.

"If the condition of your feet affects how your body moves, and therefore affects your safety when walking, ask your GP if you can be referred to a physiotherapist who specialises in neurology."

Medical News Today said: "Subtle changes in a person's walking pattern could be an early sign of Parkinson's disease

"Someone who has Parkinson's disease might walk slowly or drag their feet as they walk.

"Many refer to this as a ‘shuffling gait'.

"The person might walk at an irregular pace, suddenly walking faster or slower or changing the length of their stride."