Prostate cancer is a form of cancer that begins in the gland cells of the prostate, found only in men. It usually develops slowly, so there may be no signs for many years. In fact, symptoms of prostate cancer do not usually appear until the prostate is large enough to affect the tube that carries urine from the bladder out of the penis. Hematuria relates to blood in the urine and is a major warning sign of the deadly disease.

Blood in urine is one of the symptoms of prostate cancer, a disease that occurs when cells in the prostate start to grow out of control.

The prostate is a gland that is sized and shaped like a walnut, which is found in a man's reproductive system and located below the bladder, near the rectum and around the urethra.

Due to the location of the gland, prostate cancer affects both the reproductive and urinary systems.

In a study published by Hindawi gross hematuria in patients with prostate cancer was investigated.

The study noted: "The objective of the study is to assess the etiology and prognosis of gross hematuria (GH) in patients with carcinoma of the prostate (CAP).

"The common etiologies of GH in group one was bladder cancer (38.5 percent) and urinary infection (23 percent).

In contrast, CAP itself caused GH in 60 percent of the patients."

The study concluded that etiology of GH in patients with CAP varies according to primary treatment. 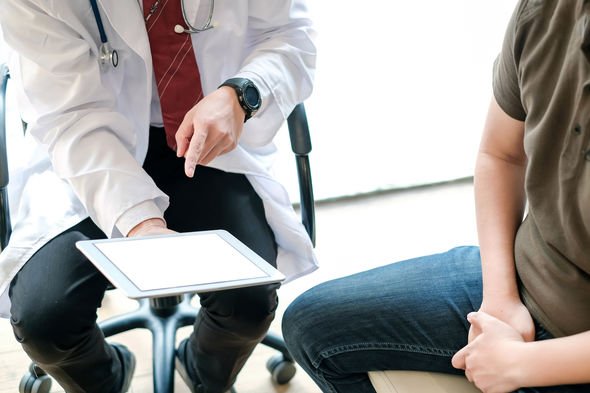 Benign prostate enlargement (BPE) is the medical term to describe an enlarged prostate - is a condition that can affect how you urinate.

Other urinary symptoms associated with prostate cancer include:

Make an appointment to see your doctor anytime you notice blood in your urine.

Some medications, such as the laxative Ex-lax, and certain foods, including beetroots, rhubarb and berries, can cause a person's urine to turn red.

A change in urine colour caused by drugs, food or exercise might go away within a few days.

Bloody urine looks different, but you might not be able to tell the difference.

It's best to see your GP if you see red-coloured urine who will be able to determine the cause.