Stomach bloating causes range from benign yet bothersome conditions including lactose intolerance to serious diagnoses like cancer. How can you tell whether your bloating is a nuisance or a sign of something more worrisome?

A person is seriously bloated when their symptoms are caused by a condition that requires immediate medical attention.

It's important to be familiar with the warning signs and symptoms that might indicate something ominous.

Most bloating subsides after a few hours or after taking the correct medication but sometimes the bloating persists and can cause agonising pain.

Dr Oz explains that if a person finds bloating is "interfering" with their lives and has a constant negative impact, this could be a red flag.

If people notice a persistent and unusually inflated abdomen or experience bouts of pain which can be intense, they should speak to their GP about the possible cause of this.

Gastroenterologist at Harvard Massachusetts General Hospital, Kyle Staller added: "If someone is suddenly having bloating in older age, that's sometimes a red flag that tells me something has changed and needs to be investigated."

Bloating can often be due to underlying health conditions.

According to Harvard Health, these could be irritable bowel syndrome which is a condition characterised by a combination of symptoms that last for three or more months.

An Inflammatory bowel disease which is inflammation of the lining of the gastrointestinal tract, including Crohn's disease and ulcerative colitis.

Celiac disease which is an autoimmune disease in which the immune system attacks the small intestine and is triggered by a protein known as gluten that is found in wheat, barley, and rye.

Weight loss is one of the main warning signs for bloating signalling something could potentially be more serious.

If a person is finding themselves losing more than a few pounds without changing their diet or starting a new exercise regimen, that should be a cause for concern. 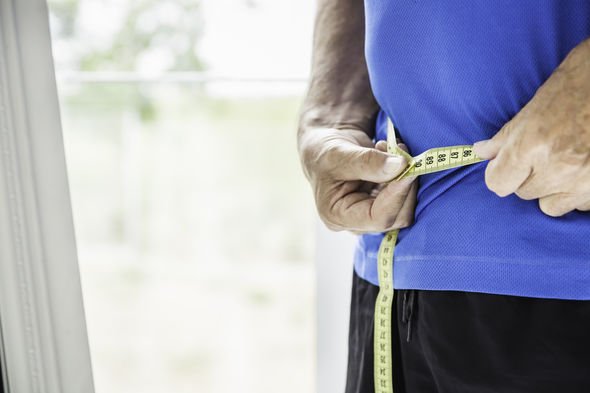 Weight loss can be caused by tumours which press on the intestines, making one feel full after just a small amount of food.

Weight loss can also be from substances secreted by tumours which suppress the appetite.

Stomach cancer is usually asymptomatic early on, or causes vague symptoms like bloating, indigestion and a feeling of fullness in the upper abdomen.

Stomach cancer, like pancreatic cancer, may have already reached an advanced stage at diagnosis, in which case there will likely be additional symptoms of weight loss, nausea and abdominal pain.

"If your bloating symptoms persist, consult your GP to rule out a more serious condition," added the NHS.

It should be noted there are many less serious causes of bloating.

Eating cruciferous vegetables like cabbage, sprouts and cauliflower can cause bloating as the digestive system has to work harder to break these foods down.

Swallowing too much air can also cause bloating, for example talking while eating.