The regal ship's decommissioning in 1997 was a blow to the Queen and the monarchy that Philip has never forgiven or forgotten. The yacht that had raised billions of pounds in UK exports and travelled more than a million miles for Britain could and should, believes Philip, have been replaced. And in a typically blunt verdict on John Major's 1990s government he told biographer Gyles Brandreth they made a "complete b****cks" of it. Now - as he prepares for a low-key lockdown birthday lunch with the Queen - Philip is, say courtiers, delighted that the royal yacht may now sail again, backed by MPs and business leaders who see it as an invaluable ambassador for Britain.

"His philosophy is just to deal with whatever life throws at you," said one. "But he has always seen Britannia as an opportunity lost. Not because it couldn't be done but because the government bungled it through incompetence and spinelessness."

To this day he blames Sir John, chancellor Norman Lamont and defence secretary Michael Portillo for dithering until the opportunity was lost.

He told Brandreth: "Major was blocked by Lamont and didn't get the Opposition on board. And then Portillo got involved and made a complete b****cks of it. Absolutely idiotic."

Philip's vision was for a floating trade platform for Britain with a secondary role within the Royal Navy. "It would need to have a dual role as a training ship or a command ship," he said.

"We used Britannia to help trade, for exhibitions and so on. It'd be fine for 'invisibles' but you couldn't go down a completely commercial route. I don't think we'd want Mr Fayed hiring the royal yacht to promote Harrods, do you?"

The reasons why Britannia found a place in Philip's often flinty heart are complicated, but a big attraction was that it was the first home he had had any say in.

Dumped with various aunts, uncles, schools and relatives across Europe, young Philip had grown up with little more than an old sports car and whatever clothes he could fit into a single holdall. 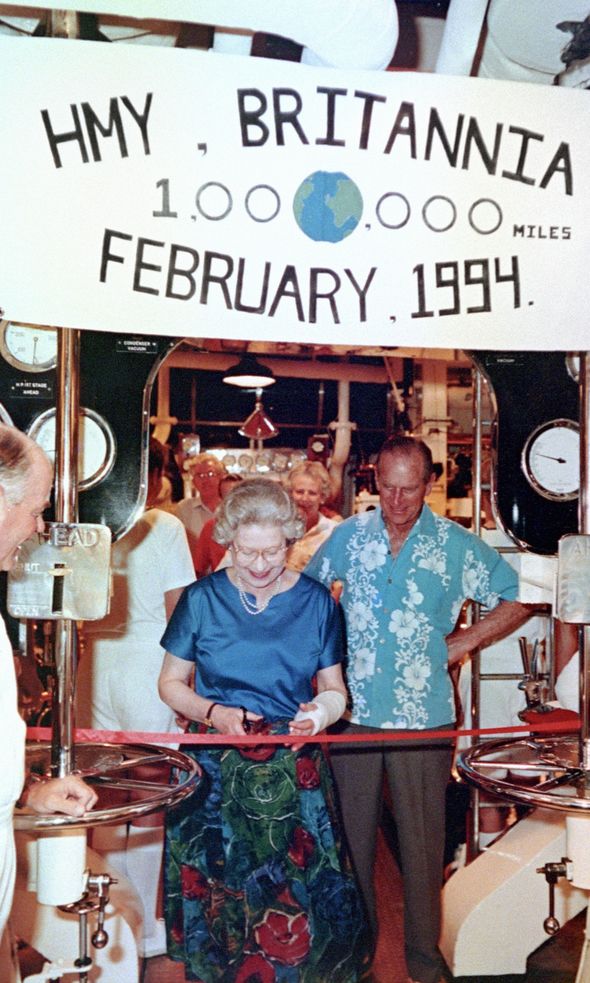 Then - while his romance with a teenage Princess Elizabeth blossomed - he became surrounded by palaces and luxury.

So in 1953 when Britannia's interiors were being fitted, Philip grasped the opportunity to create a modern home for a modern royal couple.

The royal yacht was the closest they had come to creating their own home away from the nine palaces, castles and country estates the Queen had inherited through 40 previous monarchs.

In one rare insight, Philip said of the royal yacht: "She is special for a number of reasons. Almost every previous sovereign has been responsible for building a church, a castle, a palace or just a house.

"The only comparable structure built in the present reign is Britannia. As such she is a splendid example of contemporary British design and technology and much admired wherever she is seen, particularly on official visits overseas."

Now Philip and Elizabeth could try their own ideas and choose everything from the paint colour to the carpets with the help of architect and interior designer Sir Hugh Casson.

Sir Hugh said: "The Queen is a meticulous observer with very strong views. There was no question of showing her a drawing room and her saying, 'All right, that will do'.

"She had definite views on everything, from the door handles to the shape of the lampshades."

While the Queen asked for a light, homely feeling for her sitting room, the Duke wanted his to be more of a study, with darker wood, a leather-topped writing desk, plenty of book space and a display case for a model of his first command, HMS Magpie.

The couple also chose different layouts for their connecting bedrooms on Shelter Deck.

The Queen wanted a bright floral look with lace-embroidered bed linen, while the Duke wanted everything plain and functional. In his suite he banned lace borders on anything and a replica of his rather threadbare candlewick bedspread at Buckingham Palace was sourced and installed.

Sir Hugh recalled: "It was great fun. I mean, you can't not have fun with Prince Philip and the Queen, because they're tremendously
argumentative, about everything. 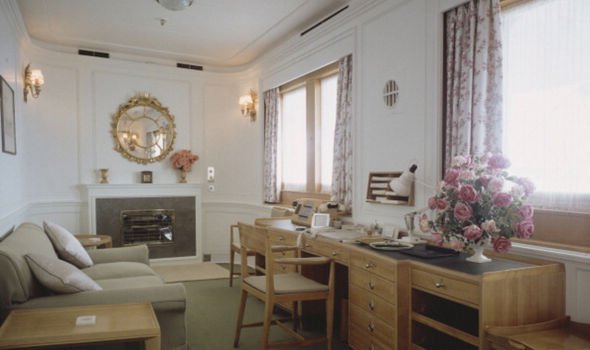 "If you have a married couple client, sooner or later one has to side with one or the other in disagreements, because there are always disagreements, you know.

"Because your own home is such a personal thing, and I always find it a bit, a bit nerve-wracking."

But Sir Hugh revealed the Queen had a slight advantage over her husband - and used it.

He said: "Because, by her position, the Queen wins the arguments, so to speak, because the house is hers…she's an extraordinary mixture of firmness and conciliation."

The couple took their inspiration from the modernist movement sweeping through the UK following the 1951 Festival of Britain, curated by Sir Hugh.

So furnishings were stripped back while chairs and tables bore the unmistakable imprint of streamlined mid-century design.

But Philip and Elizabeth did not get everything their own way. 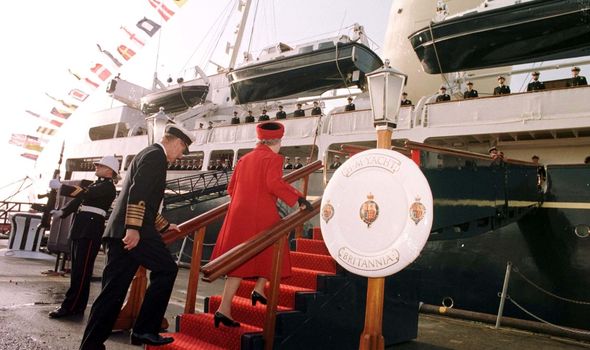 When they said they wanted an open fire in the drawing room they were told naval regulations would mean a rating would have to stand guard beside it with a fire bucket. Ever practical, the Duke gave up the argument and settled for an electric fire instead.

Other practical considerations included a garage for the Queen's Rolls-Royce Phantom V not to mention a knighting stool, just in case.

There was also a mahogany windbreak on the bridge where Her Majesty would stand on formal occasions.

The windbreak was only approved after it had been road tested on Buckingham Palace secretaries in a wind tunnel to see if sudden gusts might expose the Queen's underwear.

But inspiration came from other areas too. The shade of blue paint used on Britannia's hull was matched exactly to the colour of Bluebottle, a racing yacht that the royal couple had been given as a wedding present.

Philip and Elizabeth were so fond of the royal yacht that after its decommissioning their favourite fittings were removed for display in the Britannia room at Frogmore House near Windsor Castle.

Royal retainers are positive that Britannia was a home full of happy memories for the royal couple. 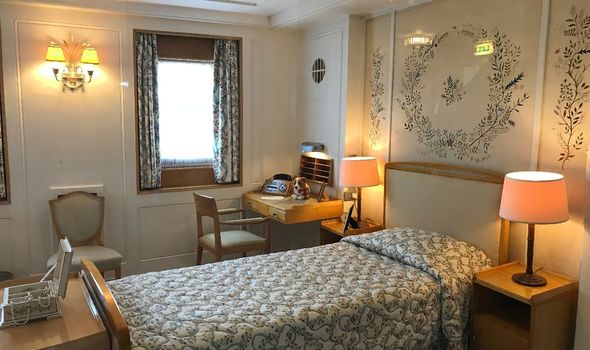 Each trip included a special command performance talent show where the crew, the household and the family did their best to entertain the others.

One regular passenger said: "The most memorable performance ever came from the Navy ratings - called Yotties - who put on a Riverdance routine clodhopping around in government-issue military wellies.

"It's a miracle none of them flew off and injured the Queen."

In such a relaxed atmosphere informality could go a long way, but only so far as one guest discovered.

Former Australian prime minister John Gorton recalled one beach barbecue with the family during a 1970 tour Down Under, when the royal party decided on a swim.

He said: "Princess Anne was thrown in and then Prince Philip. 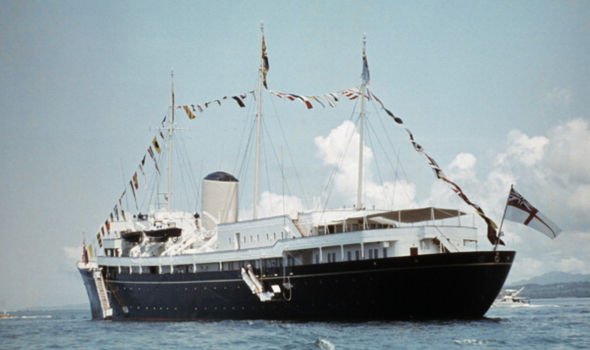 "I was sitting next to Her Majesty and I was just about to throw her in but I looked at her and something about the way she looked at me told me that perhaps I shouldn't. In the end, the Queen was the only one who stayed dry." The crew became used to the quirks of all their royal passengers. Philip would often ask for his favourite snack of egg poached in cream while the Queen Mother only ate peas if they were sprinkled with sugar.

Prince Edward baffled the royal household and yachtsmen alike by bringing his boyhood teddy bear with him on every trip.

On one turbulent visit to the US, a royal yacht officer was using very salty language to tell a Californian official that they would need a coach to collect the royal party when it docked.

As he hung up with a flourish of expletives, the horrified officer turned around to find the Queen behind him.

But she smiled: "I've been married to a sailor for 36 years - I've heard it all before."

Now - just three days shy of his 99th birthday - Philip is, say courtiers, delighted that there is again serious discussion of a new Britannia to rule the waves.

"It is what he argued for all those years ago and here we are decades later and the argument finally seems to be going his way," said one.

"He knows, of course, that he might never set foot on a new Britannia but it would be a fitting legacy to leave for his family and for the nation."